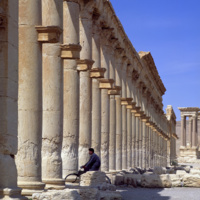 Exhibition: Carolyn Brown and Palmyra: An Ancient City Through the Lens

Curated by Dr. Michael Thomas, Director of the Edith O’Donnell Institute of Art History and Heather Bowling, the Institute’s Research Coordinator, the exhibition is presented by the O’Donnell Institute and will be on view at the Crow Museum of Asian Art of The University of Texas at Dallas from October 9, 2021 through January 2, 2022.

Dallas-based photographer Carolyn Brown specializes in brilliantly composed images of architecture, portraying both the beauty and distinct character of the built environment, while also emphasizing human presence and cultural heritage. Ranging from churches in Mexico, to the Art Deco architecture of Fair Park in Dallas, to well-known ancient monuments in the Near East, Brown’s work captures unique details that embody culture and define place. In 1989, she traveled to the Syrian desert, making her first trip of many to the ancient caravan city of Palmyra to photograph its distinct beauty and architectural grandeur. Renowned in both the ancient and modern world, the monumental architectural remains reflect a dynamic blend of cultures and traditions. Her images overcome the harsh desert sun to reveal the remarkable detail and subtle hues of this stone cityscape.

In 1980, Palmyra became a UNESCO World heritage site, cementing its position as a place of invaluable significance not only to the global community, but also as a locus of national identity and pride for the Syrian people. As the world looked on in horror in 2015, and then again in 2017, the terrorist organization known as ISIS overran the ancient city, committing monstrous attacks on its people, buildings, monuments, and artifacts. Accompanying the work of Carolyn Brown in this exhibition, the images of New York Times photographer Bryan Denton document the unfathomable destruction of the site. In capturing critical details that are now lost forever, Brown’s images provide an invaluable documentation of Palmyra’s priceless cultural heritage.

See the Crow's website for parking and other directions https://crowcollection.org/visit/