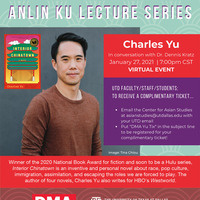 Co-sponsored by the Center for Asian Studies, School of Arts and Humanities, and the Dallas Museum of Art.

Charles Yu’s novel Interior Chinatown won the 2020 National Book Award for Fiction and will soon be a series on Hulu. Yu is the author of four books, including How to Live Safely in a Science Fictional Universe, and a writer for the HBO series Westworld. He received the National Book Foundation’s 5 Under 35 Award and was nominated for two Writers Guild of America awards. He has also written for shows on FX, AMC, and HBO. His fiction and nonfiction have appeared in the New Yorker, the New York Times, the Atlantic, the Wall Street Journal, and Wired, among other publications.

Infinitely inventive and deeply personal, Interior Chinatown is Charles Yu’s most moving, daring, and masterful novel yet; it is written in the form of a television screenplay. Willis Wu doesn’t perceive himself as the protagonist in his own life: he’s merely Generic Asian Man. Sometimes he gets to be Background Oriental Making a Weird Face or even Disgraced Son, but always he is relegated to a prop. Yet every day he leaves his tiny room in a Chinatown SRO and enters the Golden Palace restaurant, where Black and White, a procedural cop show, is in perpetual production. He’s a bit player here, too, but he dreams of being Kung Fu Guy—the most respected role that anyone who looks like him can attain. Or is it? After stumbling into the spotlight, Willis discovers the secret history of Chinatown and the buried legacy of his own family.

The Washington Post calls the book “One of the funniest books of the year... A delicious, ambitious Hollywood satire.”

This conversation will be moderated by Dr. Dennis Kratz, Professor and Founding Director of the Center for Asian Studies at the University of Texas at Dallas.

This event will be virtual, however you have the option to get a copy of the book and signed bookplate shipped to your home in addition to attending the virtual event.

UTD Faculty/Staff/Students:
To receive a complimentary virtual ticket, email the Center for Asian Studies at asianstudies@utdallas.edu using your UTD email address. Put "DMA Yu Tix" in the subject line to be registered for your free virtual ticket!

Buy Tickets from the DMA

Note: For ticket holders who are unable to attend the live event, a recording will be available through February 10 through the DMA.