The University of Texas at Dallas is closely monitoring the outbreak of COVID-19 (coronavirus). UT Southwestern Medical Center has opened a new community vaccine site on The UT Dallas campus. 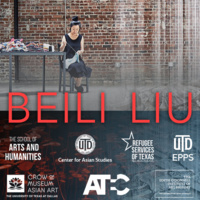 A discussion of the intersections between art, refugee policy, and human rights with distinguished artist and professor, Beili Liu.

Beili Liu is a visual artist who creates material and process-driven, site-responsive installations. Working with commonplace materials and elements such as thread, scissors, paper, stone, fire, and water, Liu manipulates their intrinsic qualities to extrapolate complex cultural narratives. Liu’s work has been exhibited in Asia, Europe, and across the United States. She has held solo exhibitions at venues such as the Ha Gamle Prestegard, Norwegian National Art and Culture Center; Hua Gallery, London, UK; and the Chinese Culture Foundation in San Francisco. Liu has been awarded the 2016 Joan Mitchell Painters and Sculptors Grant, and named the 2018 Texas State Artist in 3D medium by the Texas State Legislature and the Texas Commission on the Arts. Liu’s work has received support from the Robert Rauschenberg Foundation Artistic Innovation and Collaboration Grant (Women and Their Work, 2013) and the National Endowment for the Arts (Museum of Southeast Texas, 2014).

Born in Jilin, China, Liu now lives and works in Austin, Texas. She received her MFA from The University of Michigan, Ann Arbor, and is currently a Professor of Art at The University of Texas at Austin. Information Courtesy of the Crow Museum of Asian Art

Hosted by the School of Arts & Humanities, School of Arts, Technology and Emerging Communication, School of Economic, Political and Policy Sciences, the Center for Asian Studies and the Crow Museum of Asian Art.