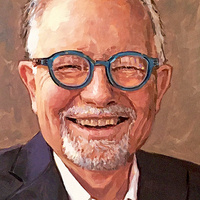 Art Exhibition: BRETTELL An Artist’s Homage to the Dynamic Influence of Rick Brettell

‘Rick’ as most all his acquaintances knew him, has left a considerable legacy in his wake. His brilliance and generosity affected many: not only institutional academics, patrons and cultural aficionados and their habitats, but also the artists whom he so revered with the appreciative and imperative understanding that ‘they’ were the vital ingredients that gave passion and resonance to his cultural mission, especially in Dallas.

This exhibition serves a dual purpose of bearing witness to Dr. Richard Brettell’s personal acquisition of artists and works that defined part of his complex rich persona and intellect, and of presenting representative works by a few of the many artists he formed close relationships with, whose work he admired along with their company and contributions to the cultural surroundings both locally and beyond.

Presented as one part is a diverse assemblage of his private collection of objects that represent his connections to his early acquisitions and ongoing travels, related gifts, artist personalities and circumstances with which he found inspirational connections. His range and taste were wide, perhaps unexpected, and certainly eclectic as those who knew him might expect, but surprisingly sparse in actual inventory that might more truly reflect the breadth of his curiosity, knowledge, and interest.

The second part of this exhibition seeks to be a fair representation, though certainly only a small portion, of his extensive reach, involvement, and influence on artists. The limited sampling demonstrates his ability to entertain a wide range of artists and their works, acknowledging his imperative impact on creating opportunity and inclusivity of local/regional artists by helping create venues of opportunity: first with the Dallas Museum of Art and then The MAC (McKinney Ave Contemporary) followed by Southside on Lamar and CentralTrak Residencies through UTDallas, The Athenaeum, the Wilcox Space initiative and finally his effort to establish a Museum of Texas Art (MOTA). The artists selected the works they wish to represent themselves with Dr. Brettell in mind. Their statements collected are reflective of thoughts relative to his influence and the opportunities he brought forward to both the collective and personal life he infused into the DFW art scene and beyond.

View the exhibition online in 3D on Matterport!

Free; open to the public; complimentary masks will be provided