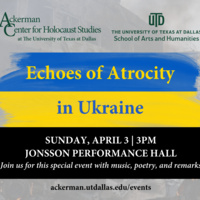 Echoes of Atrocity in Ukraine

On February 24, 2022, Ukraine was invaded by Russia in an unprovoked attack of their territorial sovereignty. Since that time, according to the United Nations, the civilian death toll for the war is over 1,100; a conservative figure as many areas are isolated due to ongoing hostilities. While this unprovoked attack has drawn the ire of the international community, it also recalls the troubled history of this country as it has struggled through war, famine, and occupation in its fight for autonomy and recognition among the European nations. As targeted attacks continue in the country’s fight for survival, please join us for Echoes of Atrocity, which will pay tribute to those lost, as we remember the victims of this region, both past and present, caught in the onslaught of war.

This is a special in-person event on the UT Dallas campus and will feature music, poetry, and remarks. Members of the UT Dallas Choirs will be performing solos.

PARKING:
Parking is available in any of the numbered metered spots on the first floor of Parking Structure 3 (PS3 on the map). PS3 is located just south of Synergy/Rutford Avenue. You can use the parking coupon code 41761091 for complimentary parking. There will be a parking greeter in a yellow vest there to assist.