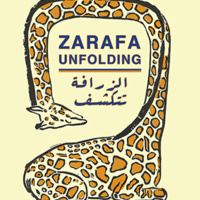 Zarafa Unfolding is an exhibition of art works, installations and performances exploring the cultural complexities of issues and identities of creatives coming from Middle-Eastern and South-Asian descent. Most are artists who have connected with Dallas at one time or another, making contributions which have helped define this city and beyond as more globally dynamic. Their work represents a diversity of situations, perspectives, mediums and actions through their individual efforts to define themselves as creative agents within colliding cultures- while also confronting differences within their own cultures.

The word “Zarafa” is Arabic for “charming” or “lovely one,” it is also the phonetic word for the strange, exotic, African creature known as the “giraffe” in English. The historic name “Zarafa” was given to this odd, beautiful anomaly of nature, stolen from its homeland Sudan and transplanted to Paris—the center of the Western world in 1827—to a spellbound public that had never before seen the likes of such curiosity. A diplomatic gesture that failed, a spectacle unrehearsed and a longing—struggling to adapt in such a foreign land… this story is not unfamiliar, nor need it be, in charting the challenges of one’s own creative adaptation, intellect and reflective verve.