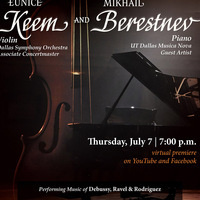 The School of Arts & Humanities presents:

For those who were unable to join us for the in-person premiere on April 2, 2022, we will be presenting a virtual premiere of the recording of this concert on Thursday, July 7, 2022 at 7 p.m. on our YouTube and Facebook accounts.

The concert will continue to be available for future streaming after the premiere on both YouTube and Facebook.

Praise for Russian pianist Mikhail Berestnev includes:  “…flawing technique and constant inspiration…superb sonority…” (Belgian La Libre Magazine) and “…an astonishingly gifted pianist…equally at home as a soloist and collaborative pianist” (Theater Jones, U.S.).  Berestnev has won prizes at the Delphic Games, the Stanislav Neuhaus Competitions in Russia, the Sydney International Competition, the BNDES International Piano Competition (Rio de Janeiro), the Neuhaus International Piano Competition (Chelyabinsk, Russia) and the Maria Canals International Piano Competition (Barcelona).  He was also a semifinalist in the Queen Elisabeth International Piano Competition in Brussels.  He has performed with many Russian orchestras as well as the TCU, Meadows, Sydney, San Angelo and Brazilian Symphonies, the Royal Chamber Orchestra of Wallonia and the Plano, San Angelo, Irving and Fort Worth Symphonies.  He is also active in chamber music, including performances with musicians from leading Russian Orchestras such as the Symphony Orchestra of the Bolshoi Theatre and the ensembles Moscow Virtuosi, Musica Viva, the Julius Quartet and, most recently, the MAKE Trio.  He studied at the Russian Academy of Music, TCU (Artist Diploma) and SMU (Performance Diploma), and he recently recorded his first solo album.  Berestnev regularly performs with Musica Nova at UT Dallas.