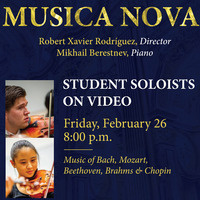 Due to the COVID-19 pandemic, during the fall semester of 2020, UTD’s Advanced Orchestra/Chamber Music Ensemble (Musica Nova) did not rehearse as an ensemble or perform in concert. Instead, students recorded these videos of solo literature with guest artist Mikhail Berestnev’s recorded piano accompaniments.

There was more music than would fit in one concert, so we are presenting two separate programs.  The student performers on each program will be different, although some repertoire appears in both.

Music by Robert Xavier Rodríguez has been performed by conductors such as Sir Neville Marriner, Antal Dorati, Eduardo Mata, James DePriest, Sir Raymond Leppard, Keith Lockhart, Andrew Litton and Leonard Slatkin and by such organizations as the New York City Opera, Brooklyn Academy of Music, Vienna Schauspielhaus, Dallas Opera, Houston Grand Opera, Vienna Schauspielhaus, Israel Philharmonic, Mexico City Philharmonic, Cleveland Orchestra and the Seattle, Houston, Dallas, Pittsburgh, Indianapolis, Baltimore, St. Louis, National, Boston and Chicago Symphonies.  He has received a Guggenheim Fellowship, the Goddard Lieberson Award from the American Academy of Arts and Letters, the Prix Lili Boulanger and the Prix de Composition Prince Pierre de Monaco.  Rodríguez has served as Composer-in-Residence with the San Antonio Symphony and the Dallas Symphony.  Twenty CDs featuring his music have been recorded (1999 Grammy nomination), and his music is published exclusively by G. Schirmer.  He is Professor of Music at the University of Texas at Dallas, where he holds an Endowed Chair of Art and Aesthetic Studies and is Director of the Musica Nova Ensemble.