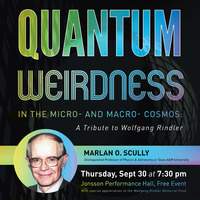 Quantum Weirdness in the Micro- and Macro- Cosmos: A Tribute to Wolfgang Rindler

Featuring Dr. Marlan O. Scully, Distinguished Professor of Physics and Astronomy at Texas A&M University in an event sponsored by the School of Arts and Humanities and the School of Natural Sciences and Mathematics.

Abstract:
Of the quantum world, Niels Bohr said: “Those who are not shocked when they first come across quantum theory cannot possibly have understood it.” Indeed, the crazy “quantum eraser” is a case in point. The strange quantum nature of black hole evaporation and related acceleration radiation in Rindler space are examples of quantum weirdness in the macro-cosmos. Wolfgang Rindler’s deep insight into this field of study will be recalled with pleasure.

This event was recorded and can be watched on YouTube

Bio:
Marlan O. Scully is Distinguished Professor of Physics and Astronomy at Texas A&M University. He has been instrumental in many seminal contributions to laser science and quantum optics. He has been elected to the National Academy of Sciences, the Academia Europaea, the Russian Academy of Sciences, and the Max Planck Society and has received numerous awards including the Charles H. Townes Award of the OSA, the Quantum Electronics Award of IEEE, the Elliott Cresson Medal of the Franklin Institute, the Adolph E. Lomb Medal of the OSA, a Guggenheim Fellowship, and the Alexander von Humboldt Distinguished Faculty Prize. More recently, he was awarded the OSA Frederic Ives Medal / Quinn Prize which recognizes overall distinction in optics and is the highest award of the society, was named Einstein Professor by the Chinese Academy of Sciences, and received the Commemorative Medal of the Senate of the Czech Republic.

More about Dr. Rindler:
Wolfgang Rindler was professor emeritus of physics, one of the founding faculty members of The University of Texas at Dallas, and a supporter of A&H. Born in Vienna, Austria, his career spanned more than 60 years. He was one of the most prominent experts in theoretical relativistic cosmology and general relativity, areas of research that deal with the origin, evolution and structure of the universe. He was instrumental not only in the founding of the Department of Physics at UT Dallas, but also in the rise of scientific research at the University.