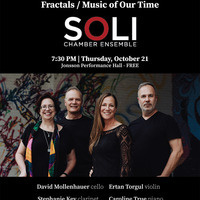 Join us for an evening of chamber music by living American composers.  The San Antonio-based performers are widely acclaimed for their exciting performances of the music of America today.

The University of Texas at Dallas strongly urges the University community to wear masks indoors and to observe safe distancing.

The SOLI Chamber Ensemble is the recipient of the 2013 CMA/ASCAP Adventurous Programming Award.  They have received awards and grants from the Aaron Copland Fund for Music, the National Endowment for the Arts, the Texas Commission on the Arts, the Amphion Foundation, Chamber Music America, New Music USA’s Creative Connections, Meet the Composer, The Russell Hill Rogers Fund for the Arts, the Argosy Foundation, The Tobin Endowment, the Cornyation Foundation and the City of San Antonio’s Department of Arts & Culture.

An avid performer of contemporary music, STEPHANIE KEY is the founding and current Artistic Director of SOLI Chamber Ensemble. She received her BM with Distinction in Performance from New England Conservatory in Boston, and she has performed with many orchestras and ensembles across the country and internationally. She is Associate Principal and Eb Clarinetist with the San Antonio Symphony and serves on the music faculty at Trinity University.  Ms. Key is a designated Artist with Buffet Crampon, makers of fine wind instruments.

Turkish-American violinist ERTAN TORGUL balances a full calendar of national and international recital engagements, chamber music concerts and solo appearances. He has been SOLI Chamber Ensemble’s violinist since 1996.  He has served as Artistic Director from 2011 to 2019, and he was the group’s Managing Director from 2011 to 2020. Mr. Torgul is a founding member of the SUONO Duo/Trio, Quartet ES, and Quinteto Quilombo. He serves as Lecturer of violin & chamber music at UC Santa Barbara and as Affiliate Artist in violin at the University of Houston.

Cellist DAVID MOLLENAUER received his Bachelor and Master of Music degrees from The Juilliard School with Harvey Shapiro and continued his studies with Lynn Harrell at USC.  He has performed across the U.S., Central America, Europe and Asia. An avid chamber musician, Mr. Mollenhauer is a founding member of SOLI.  He is Assistant Principal Cello of the San Antonio Symphony, and he teaches cello at Trinity University.

An inaugural member of the Steinway Music Teacher Hall of Fame, prize-winning pianist CAROLYN TRUE is Professor of Music at Trinity University and a founding member of SOLI Chamber Ensemble. She walks the delicate balance between teaching and actively performing solo, chamber and orchestral repertoire on the national and international stage. Ms. True holds the prestigious Performers’ Certificate and a DMA from the Eastman School of Music.

Jonsson Performance Hall, JO 2.604  Jonsson Performance Hall is on the north mall inside Erik Jonsson Academic Center (JO) in room number JO 2.604.  Persons with disabilities may submit a request for accommodations to participate in this event at UT Dallas' ADA website. You may also call (972) 883-5331 for assistance or send an email to ADACoordinator@utdallas.edu. All requests should be received no later than 2 business days prior to the event.