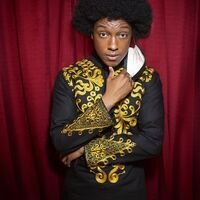 This year SUAAB bring to double headliner with comedians:

Jason Banks is a stand-up comedian based out of Columbus, Ohio. His unique and refreshing style of comedy has helped him emerge as one of the top rising talents on the comedy scene. Jason’s natural ability to connect with any crowd with humorous yet over exaggerated stories has placed him as one of Columbus’s top comedians. In addition to stand up comedy, Jason is an online comedic content creator with a TikTok following of over 4 million followers.

Josh Johnson is a stand-up, writer, and performer from Louisiana by way of Chicago. He is currently a writer on The Daily Show with Trevor Noah and is a former writer and performer on The Tonight Show Starring Jimmy Fallon, where he made his late-night debut. As a stand-up, Josh has performed at clubs, colleges and festivals around the world and was named New York’s Funniest Comic at Caroline's during the New York Comedy Festival.