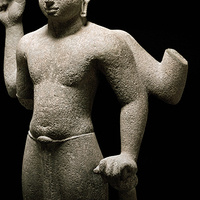 Vishnu Across Time and Space

The Crow Museum of Asian Art presents Vishnu Across Time and Space, a new exhibition derived from the permanent collection.

This exhibition focuses on Vishnu, one of the most powerful and popular gods in the Hindu pantheon. Vishnu’s followers celebrate him as the Preserver and for his ability to restore the cosmic balance of the universe. Vishnu can be recognized in Hindu art by the objects he carries. He has two favorite weapons: the chakra, which is depicted as either a razor-sharp discus or a spoked wheel, and the mace, which is a kind of club. He also carries a lotus flower or bud, and his conch shell, which he blows like a trumpet. Vishnu often flies down from heaven on Garuda, who is part-man, part- eagle, and he is sometimes accompanied by his female consort Lakshmi, goddess of fortune. For worshippers of Vishnu, Vishnu is omnipresent and omnipotent; he has every form and no form. In order to save the world from peril, Vishnu descends to earth in a limited concrete body called an avatar. The different avatars are in fact Vishnu, but they represent specific aspects of the god. Avatars are Vishnu’s signature method of action; because of them, he is a god of many faces and personalities. The artistic and visual representations of Vishnu change in style and appearance across time and place, and may look completely different depending on the context.

Through a selection of works of art from the museum’s collection, we invite you to contemplate the multiple facets of this deity.

Free to the public